Varalakshmi Puja day is considered as a very important day to worship the goddess of wealth and prosperity. Varalakshmi is the consort of Lord Vishnu and one of the forms of Goddess Mahalakshmi. Varalakshmi was appeared from the milky ocean or Kshir Sagar. She was having the complexion of milky ocean and wears similar color attire.

It is believed that Goddess Varalakshmi confers boons and fulfills the desires of her devotees. Hence this form of the goddess is called as Vara and Lakshmi, or the Goddess Lakshmi who confers boons. 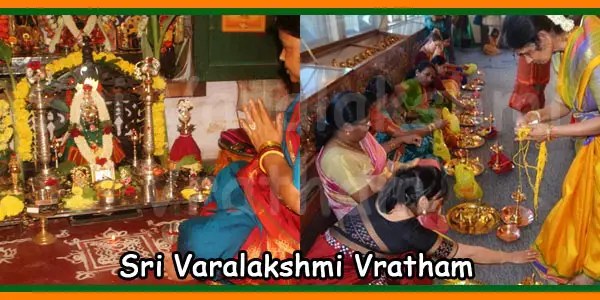 About Varalakshmi Viratam / Vratam / Vrat:
Varalakshmi fasting is observed on the last Friday of Shravana Shukla Paksha which occurs few days ahead of Rakhi and Shravana Purnima.

Varalakshmi Vrat is very popular in Andhra Pradesh, Telangana, Karnataka, Tamil Nadu and Maharashtra, where married women observe Varalakshmi Vrat for the well-being of their husband and family members. Worshipping Goddess Vara-Lakshmi on this day is believed to be equivalent to worshipping Ashtalakshmi or ‘the eight Goddesses’. Sri, Bhu, Saraswati, Priti, Kirti, Shanti, Tushti and Pushti are the eight Goddesses referred here.