Kedara Gauri Vrat or Kedara Vratham is an important fasting ritual for the devotees of Lord Shiva, generally observed in the Southern states of India, especially in Tamil Nadu. It is observed on the day of Deepavali Amavasya, which coincides with the Lakshmi Puja day during Diwali. 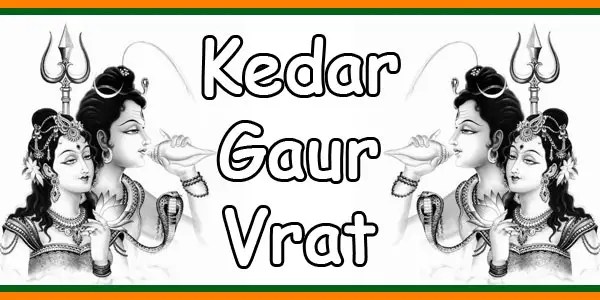 Rituals of the Kedara Vrata:
# In the Kedara Vrata, the ‘Ardha Nareeshwara’ form of Lord Shiva is worshipped by the devotees. Just like other important vratas of the Hindu culture, in Kedara Vrata also austerities like complete fast or semi-fast on milk or fruits are observed.

# On the propitious day of Bhadrapada Shuklam, one must observe this vrata and wear 21 layered threads on their hand. The vrata should be performed with clear mind and then puja and fasting is observed for all day long.

# On the subsequent day, the devotee must invite a Brahmin and provide him meals. The puja for Kedara Vrata continues for a period of 21 days right from Kedareswara till Amavasa. The devotees perform the puja by installing a Kalasha in any sanctified place of their house. The Kalasha is covered with silk clothes, on which heap of rice is placed and 21 threads are tied around it. Gold or other valuable gems are also placed depending on individual’s affordability.

# Twenty-one Brahmins are then invited and the devotees offer them water and other necessities to clean and invoke the presence of Lord Kedareswara in the Kalash. Then the puja is performed on the Kalash with kumkum, sandalwood paste, akshata, musk, myrrh, tamboolams and flowers. Deepam and incense are also offered.

# While performing puja, mantras praising Lord Shiva are recited with full devotion. Special food offerings called as ‘Naivadya’ comprising of 21 varieties of food including coconut are offered to please the Lord Shiva. After the completion of puja, dakshina is provided to every Brahmin as per their liking. Sweets and Prasad are also distributed among other devotees and the poor. By performing these complete rituals of the Kedara Vrata, Lord Kedareswara will be contented and grant all your wishes.

Importance of Kedara Gauri Vrat:
The glories of Kedara Gauri Vrat are explained in several Hindu religious writings as ‘Skanda Purana’. Several gods and Goddesses also played this sacred vrat to obtain the desired results. Kedara Gauri Vrat is one of the important Saivite vratas which is observed with full dedication by the disciples of Lord Shiva. According to legends, Devi Parvati observed this vratam to merge with Lord Shiva and was then known as ‘Ardha Nareeshwara’. Lord Vishnu also observed this vrat to become Lord of Vaikunta and Lord Brahma obtained his Hamsa Vahan after observing this Vrat. It is believed that a person who devoutly performs Kedara Gauri Vrat 21 times will be granted with all worldly desires and will eventually gain ‘Moksha’ by merging with the Supreme Being. This propitious vratam is thus observed by all individuals, regardless of caste, religious belief and discrimination.