Obeisances unto the supreme Bhagawan
known as Sudarshana Vasudev Dhanvantari,
The holder of the kalasha full of nectar of immortality,
who removes all fears,who removes all diseases,
The well wisher of the Three worlds, and sustainer of the three worlds,
He is Vishnu Swarup, By the name Dhanvantari Empowered to Heal the Jiva souls.

Lord Dhanvantari is an outstanding personality in the history of Ayurveda. He was the physician of the Gods (in both the Vedas and Puranas) and an excellent surgeon. In Hinduism, worshipers pray to Dhanvantari seeking his blessings for sound healing. In his incarnation as king of Kashi, Divodasa, he was approached by a group of sages (including Susruta, the great Indian surgeon) with the request to teach them the science of Ayurveda. Dhanvantari stated that Brahma composed the Ayurveda even before he created mankind, forming one of the upangas of the Atharvaveda in 100,000 verses arranged in 1,000 chapters, which was not easy for the restricted intelligence of men to learn within their short life spans. So Dhanvantari complied with the sages’ request, recast Brahma’s Ayurveda into 8 divisions (shalya, shalakya, kayachikitsa, bhutavidya, kaumarabhrtya, agadatantra, rasayanatantra, vajikaranatantra) and began teaching within the framework of pratyaksa (perception), agama (authoritative scripture), anumana (inference) and upamana (analogy).

In other versions of the origins of Ayurveda, it has been said that Dhanvantari was deputed by Lord Indra to take the science of Ayurveda to the mortals. Also to be noted, Dhanvantari is seen as an avatar of Vishnu in Hinduism. The most frequently told story about Dhanvantari is that when the ocean was churned by the gods and demons in search of the elixir of life, Dhanvantari came out of it holding a bowl of nectar in his hands. 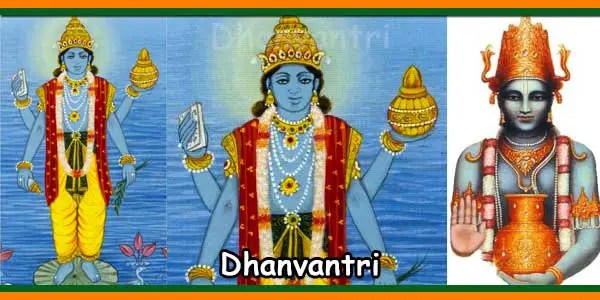 “The word dhanus is only indicative (upalakshna). It denotes the science of surgery. The one who has seen the end (anta) of it is Dhanvantari.

The word dhanvan means desert. (Compare RigVeda [V.36.1] dhanvachara meaning, he who moves in a desert). There is a mantra in the Veda: dhanvan iva prapaasi (O Lord! You are like the place where water is distributed to travellers in a desert.) Thus Dhanvantari, the incarnation of Lord Vishnu, with a pot of nectar in his hand is like prapaa (oasis) in the desert of worldly existence.”

Bhagavata Purana states that Dhanvantari emerged from the Ocean of Milk and appeared with the pot of amrita (nectar) during the story of the Samudra (or) Sagara Mathana whilst the ocean was being churned by the Devas and Asuras, using the Mandara mountain and the serpent Vasuki. The pot of Amrita was snatched by the Asuras, and after this event another avatar, Mohini, appears and takes the nectar back from the Asuras.

It is also believed that Dhanvantari promulgated the practise of Ayurveda. According to the Charaka Samhita, the knowledge of Ayurveda is eternal and is revealed in each of the cycles of creation of the universe. When needed, Lord Vishnu himself incarnates as Lord Dhanvantari and reestablishes the tradition of Ayurveda in the world to help relieve some of humanity’s suffering.

Lord Dhanvantari is known as the father of Ayurveda, since he was the first divine incarnation to impart its wisdom amongst humans. He first appeared during the great churning of the cosmic ocean of milk to deliver amrit (ambrosia, or Divine nectar) to the demigods. The churning of the ocean of milk is a famous episode in the Puranas that represents the spiritual endeavor of a person to achieve Self-realization through concentration of mind, withdrawal of the senses, control of all desires, austerities and asceticism. It is celebrated in India every twelve years in the holy festival known as Kumbha Mela. The following story is from the Srimad Bhagavatam.

Indra, the great leader of the demigods, was riding on his elephant when he came across the sage Durvasa Muni. Seeing the great demigod, Durvasa offered him a special garland that had been blessed by Sri, another manifestation of Laxmi, the Goddess of Abundance. Indra accepted the garland nonchalantly and put it on the trunk of his elephant, who tossed it on the floor. Durvasa Muni was very upset by this display of disrespect, and in anger cursed Indra and all the demigods to be bereft of all strength, energy and fortune right then and there.

Taking advantage of this situation, the Asuras (demons) attacked the demigods, killing many of them and slowly gaining control of the universe. Indra and the other demigods rushed to Brahma for help. Brahma suggested to bring their predicament to Lord Vishnu, who in turn advised them to seek alliance with the Asuras to churn the ocean of milk together for the nectar of immortality. The demigods agreed only because Lord Vishnu told them that he would make sure they alone would obtain the nectar and recover their strength and power to defeat the demons.

Using the mountain Mandara as the rod and Vasuki the serpent as the cord, both demigods and demons proceeded to churn the ocean of milk. All kinds of herbs were cast into it. The churning was so arduous that Lord Vishnu had to appear in many forms to help them with this process and prevent it from going nowhere. He even appeared as Lord Vishnu himself sitting on top of the mountain to infuse Indra and his companions with energy.

The churning of the ocean of milk first produced a deadly poison (halahala) that only Lord Shiva could swallow without being affected by it. And so he did, except that his consort Parvati pressed his neck as he was swallowing, so that the poison would not reach his stomach, and the halahala stayed in Lord Shiva’s throat, changing the color of his neck to blue due to its potency. This is why Lord Shiva is also called Neelakantha, or the blue-necked one.

As the churning continued, Lord Dhanvantari appeared. He was young and strongly built, his chest was very broad and his complexion bluish black. He had strong arms, reddish eyes, and moved like a lion. He was clad in bright yellow, his curly hair was anointed with oil and he wore shining earrings made of pearl. As he emerged, he was holding a conch, leeches, healing herbs, a chakra (one of the divine weapons of Lord Vishnu’s), and the long sought pot of ambrosia. The asuras, greedy after all things, realized right away that the container was full of nectar and snatched it from him.

Again filled with greed and pride, the demons started quarreling about which of them would drink the nectar first, grabbing the pot from one another and behaving like thieves. Seeing how busy they were fighting with each other, Lord Vishnu didn’t miss the opportunity to trick them. He appeared as Mohini, a beautiful woman who fascinated the demons, recovered the nectar from them, and distributed it only amongst the demigods. As soon as the demigods drank it, they were invigorated with energy and defeated the demons. After worshipping Lord Vishnu and Shri Laxmi, they resumed their position in the heavens.

At the time of the churning, Lord Vishnu foretold that Lord Dhanvantari would appear again in the world to teach the science of Ayurveda. And so he did, after Lord Indra, seeing humanity so afflicted by pain and disease, pleaded with Lord Dhanvantari to descend into the material world and teach Ayurveda to the human race.

It is written in the scriptures that, “One who remembers the name of Dhanvantari can be released from all disease.” Lord Dhanvantari is worshipped all over India as the God of Medicine.

Lord Indra, after seeing humanity so afflicted by pain and disease, pleaded with Lord Dhanvantari to descend into the material world and teach Ayurveda to the human race. Dhanvantari, one of the many avatars (divine incarnations) of Lord Vishnu’s, is known as Adi-Dhanvantari.

King Dirghatamas of Kashi (Benares) was performing severe austerities and offering them to Lord Dhanvantari in the hopes that he would be pleased with them and grant him a son. And happy with the devotion of the King was born in the in the royal household of Kashi. He taught Ayurveda orally to the sages and rishis (seers) who became his disciples. His teachings are recorded in the Agni Purana, as well as through the teachings of his disciples Susruta, Pauskalavata, Aurabha, Vaitarana, and others.

On the day of Dhanteras, birthday celebrations of Dhanvantari, the God of health, take place in an enthusiastic and delightful atmosphere. Dhanvatari Jayanti is celebrated throughout India by the practitioners of Ayurveda, the Indian traditional medicine.

In South India, mainly in Tamilnadu and Kerala some temples are dedicated to Lord Dhanvantari. In these temples, Dhanvantari Jayanthi is celebrated with utmost devotion. In Ayurveda Maha Sammelan office, Dhanwantari Bhavan in Delhi, the Ayurvedic practitioners worship the big statue of Lord Dhanvantari.