About Kalparambha and Akal Bodhon:

In West Bengal, Kalparambha signifies the beginning of Durga Puja rituals. It is performed one day before Kolabou Puja, which is known as Navpatrika Puja. Kalparambha generally occurs on the Shashthi Tithi of the lunar month. 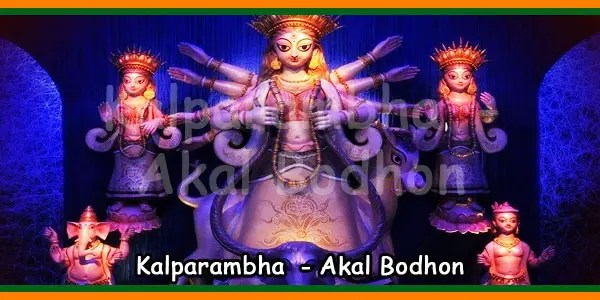 According to a Hindu legend, a Buffalo Demon Mahishasura, after years of praying to Lord Brahma, was granted a boon which made him invincible. Any man or God could not kill him. After gaining power, Mahishasura started destroying the world. He began to kill people and became a threat for Gods. To annihilate Mahishasura, Goddess Durga emerged from the collective energies of Gods as a divine feminine power. The victory of Good over the Evil is celebrated during Durga Puja.