In India, the festival of Ganesh Chaturthi is most popular in Maharashtra where they celebrate it in a grand way. Outside India it is celebrated in different countries of Asia, Europe, and North America.

In Germany, the festival is celebrated in a big manner in Frankfurt, Munich and Berlin. In the Shree Ganesha Hindu Temple of Berlin, the Ganesh Chaturthi celebration lasts for ten days. The priest performs mangal arti every day evening and the idol is immersed (visarjan) in water on the 10th day, as per Hindu traditions.

Munich witnesses the biggest Ganesh Chaturthi celebration of Germany which is arranged by The Maharashtra Mandal. Here it is celebrated only for one day. Traditional rituals and arti are performed in the morning, followed by lunch in the afternoon. Musical programs and cultural events are arranged in the evening. 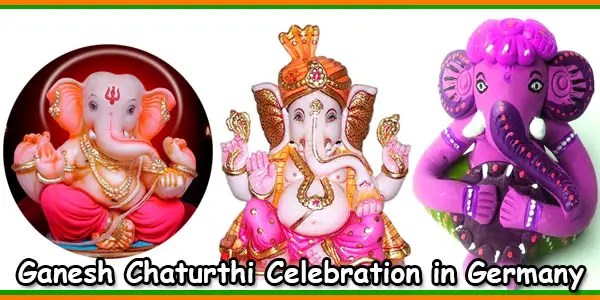 Besides taking part in the traditional pujas and ceremonies, the family members along with their kids participate in a special eco-friendly clay modeling workshop of Erlangen. In this workshop, kids are trained the art of making Ganesh idols using clay. The fees obtained from this workshop are donated to orphanages.

People in Frankfurt and Hamburg also celebrate Ganesh Chaturthi, but on a smaller scale, which is usually arranged by the local Hindu Indian Community and lasts for two days, mostly during the week end.