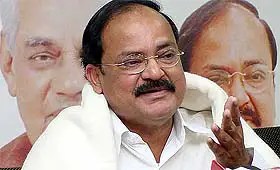 M. Venkaiah Naidu (born 1 July 1949) is an Indian politician. From 2002 to 2004, he was the ex president of the Bharatiya Janata Party, which is currently the opposition party in the Parliament of India. He resigned on October 18, 2004 and was succeeded by L.K. Advani.Mr.Naidu belongs to Nellore Dist of Andhra Pradesh and he has daughter known as Deepa who runs an automobile show room in chennai and also Swarnabharath Trust at Venkatachalam Nellore Dist.

His full name is Muppavarupu Venkaiah Naidu. He married Alluru Vajjramma. Like many BJP leaders and workers, Mr. Naidu also traces his roots to the Rashtriya Swayamsevak Sangh (RSS) and entered politics from there.

Naidu took over as BJP president after Jana Krishnamurthi stepped down in 2002.

Naidu hails from Andhra Pradesh. His mother tongue is Telugu. Mr.Naidu although occupied quite few prominent positions in public life, never succeeded in entering either parliament but he won once from udaygiri state assembly constituency of Nellore Dist, AP. Thereafter he has been member of Rajya sabha. On January 28, 2004, he was elected unopposed for a full 3 year term.He is called “Root less”leader. He cannot win as Loksabha member.As a national leader he Couldn’t build strong party cader in his home town.
On April 15, 2007, his helicopter had an emergency landing close to Lucknow airport, in Uttar Pradesh, due to hydraulic system failure. He was admitted in a nearby hospital with minor injuries.

On January 29, 2005, his helicopter was set on fire by Maoists during his campaign tour of Gaya, Bihar. At that time, he was addressing an election rally nearby and escaped unhurt.

Currently he is the member of Rajya Sabha (Upper House of the Parliament) from karnataka. Due to his prior association with Jai Andhra movement in 1972, Positioning himself and BJP for electoral gains in case of a division of Andhra Pradesh, he persuaded BJP to become pro-telangana and stalling proceeding in Rajya Sabha.