As the name suggests, this temple is devoted to worship the Goddess of knowledge, Goddess Saraswathi. The temple also has the idols of Goddess Lakshmi and Goddess Kali. There are various versions to the origin of this beautiful temple. Some say that it was built during the Chalukya period, while others believe that a king of Karnataka by name Bijialudu who ruled the Nanded area, built this Basara temple in the 6th Century.

Yet another belief is that Maharishi Veda Vyas, stopped at this spot after the Kurukshetra war and laid the foundations of this temple by placing three heaps of sand representing the idols of the three Goddesses: Lakshmi, Saraswati and Kali. It is said that Maharishi Vyasa used sand and turmeric to make these three idols. This speculation of the origin of this temple should be believed as there is a marble image of Maharishi Vyasa along with his Samadhi here at Basara. Brahmanda Purana also believes that Maharishi Veda Vyasa completed the writing of the great epic Mahabharata at this place.

This temple is the most preferred religious place for performing Akshara Abhyasam for children as it has Goddess of learning situated here. This ceremony marks the beginning of formal education in a child’s life and is held on the auspicious day of Vasant Panchami with great ordeal in the temple premises. Children enter the temple dressed in their best attires to practice writing the first alphabets in front of the Goddess of Wisdom and Knowledge on the first day of spring. Goddess Saraswati blesses them to lead the life’s journey with lot of wisdom. Children offer flowers to the Goddess and offer their books, pens and pencils as a respect to seek her blessings.

Basara Saraswati temple sees the highest number of devotees pour in during the three festivals of Vyasa Purnima, Maha Shivaratri and Dussera Navaratri. The Maha Shivaratri festival is held during the Magh Bahula Trayodashi and it represents the greatness of Lord Shiva. The temple is completely decorated with flowers and thousands of devotees from all over Telangana and Maharashtra join the celebrations. Goddess Saraswati has only two temples attributed to her in India. The other one is found in Jammu & Kashmir. Therefore, the Basara Saraswati temple has achieved great significance due to its uniqueness.

Special Attractions of Basara Temple: The three idols of the Divine Trinity, Goddess Mahakali, Goddess Saraswati and Goddess Lakshmi are the most important attractions of this place.

The specialty of this temple lies in the fact that this is the only temple in India after the one in Jammu & Kashmir which is devoted to worship the Goddess of Wisdom and Knowledge, Goddess Saraswati. 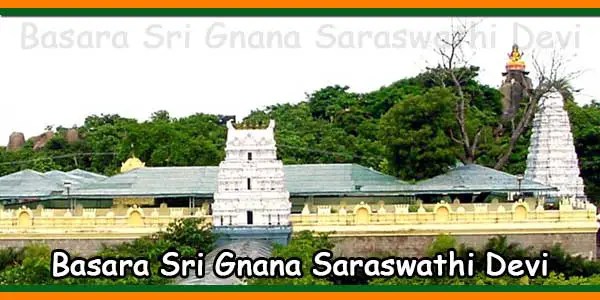 How to Reach Basara Gnana Saraswati:

By Air:
Nearest airport is Rajiv Gandhi International Airport Hyderabad whish is 257 km from the temple.

By Rail:
The Basara Railway station is nearby and is located between the Secunderabad Junction and the Mudkhed Junction.

By Road:
Basara is well connected by district buses, run by TSRTC. The temple is located about 207 kilometers from Hyderabad.
Telangana State Road Transport Corporation runs buses are available from Hyderabad to Basara from MGBS and JBS in every one hour. The Buses starting from 4.00 AM to 11:10 PM
Hyderabad – Basara: 207 Kms, Nizamabad – Basara: 31.9 Kms, Nirmal – Basara: 72.6 Kms.

Hyderabad to Basara Train Timings are:

Procedure to book Accommodation at Basara:

To reserve rooms at basar, write a letter to Executive officer along with a D.D in favour of “Executive officer, Gnana Saraswathi Devi Devastahnam” payable at “State Bank of Hyderabad-Basar, Telangana”.

Note:-
Make sure to mention the date, time, days to stay, number of people and number of rooms you want to reserve.
Register post the letter to the following Address.