Niuvu dopidi is an ancient customary still in practice where a devotee offers all the adornments that he or she is wearing at the time of visiting the temple into the temple hundi.

At times of disaster or grief, the pledges taken by the devotees are said to be fulfilled like this once their struggles are passed.

One of the difficult vows, this is generally taken during severe health trouble, like a heart attack or to save a life from an unexpected dangerous accident that puts life into risk. It is known to be very effective, pleading to the Almighty that, I am leaving all the Dharmas and the material desires, hence please protect me from this problematic circumstance, said in Bhagavad Gita as:

The women have to wear a new Mangala Sutram before offering the ornaments and then remove them in the Yoga Narasimha shrine. They then have to keep them in a cloth, knot it and then put it in the Srivari Hundi, thanking God for protecting them from their pains.

People seek blessings from the Lord all kinds for their unfulfilled desires, wants and to get through the difficulties of life matters.

They seek these blessings from Him by offering Mokkubadi (giving in return), Niluvu Dopidi (offering to the Lord whatever they wear on the body, especially jewels). They invariably give their Talaneelaalu (hair on the head) by tonsure. Villagers of neighboring also have the practice of offering cattle under Daanam (gift).

It is believed by doing so the above they get blessed by the Lord Venkateswara and get relieved psychologically. It is so strongly believed that in case of failing or neglecting the offerings to the Lord, He would make them offer with interest (fine). That is why Lord Venkateswara (Balaji) is also named as otherwise Vaddikaasulavaadu ( He who collects interest for the conscious offerings).

Thus, these are different forms of offerings through which people seek blessings from the Lord Venkateswara, the kali yuga Daivam (Lord of the present Yuga or yug). 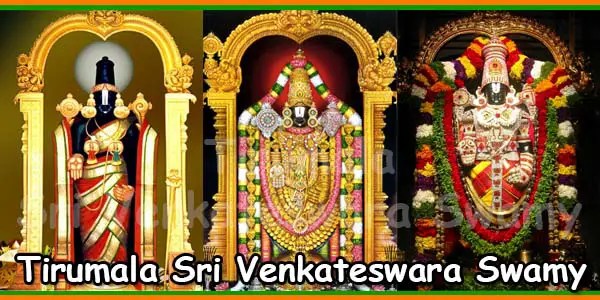