Pampa is the nearest place to Sabarimala that can be accessed by road. Sabarimala is about 5 Kms away from Pamba. Kerala State Road Transport Corporation operates buses to Pampa from Kottayam & Chengannur Railway stations.

After filling the holy coconut with ghee and packing the essentials for offering to Lord Ayyappa in the Irumudi (called ketunira), the Guru places the sacred Irumudi on the head of the pilgrims chanting Saranam. The pilgrims leave the place without looking at anyone or bidding goodbye to family or friends. Walking barefoot the pilgrims proceed to realise his Self and attain Lord Ayyappa.

It was below 5000 persons who visited Sabarimala 50 years ago, but with the coming of the road from Mannarakulanji to Chalakayam, this number has increased to 4 crores, that too in the Madala- Makaravilakku season alone.

It was too difficult for the people to reach Sabarimala before 50 years as the journey through the dense forest was so grueling an ordeal as it took days to reach the abode of God.

There are three routes to Sabarimala (0929 North 7706 East) – (a) The Erumeli route (b) The Vandiperiyar route (c) The Chalakayam route. The Erumeli route is the most arduous and the pilgrims cover about 61 km on foot through forest and hill track. The Vandiperiyar route starts at 94.4 km stone on the Kotayam – Kumili road. The Sannidhanam is about 12.8 km from here. TheChalakayam route is the easiest of all. Chalakayam is near Pampa river. Sannidhanam is just 8 km from here. 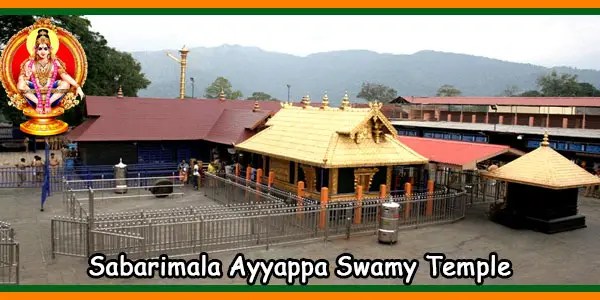 Another path was also used by people to reach Sannidhanam. That was from Kumily through Changara Estate, Uppupaara and Paandithavalam, but it was the route from Erumeli that people used regularly.

The Route- Laaha to Chalakayam has a history hidden behind it. This path was actually built not for the devotees to reach Sabarimala.

It was during 1959-60 that the road was built as part of the Sabarigiri power project that came into being in 1967. Before this project actually started, the Electricity Board tried to bring in a project named ˜Swaami Saranam”, which intented to build a dam at Thriveni to produce electricity. For this the board extended the road (Mannarakulanji- Laaha) to Chalakayam. As time passed the Sabarigiri Project gained importance and to make it a reality another road was made from Chalakayam to Ponnambalamedu. As the Sabarigiri Project became a huge success the Swaami Saranam Project was dropped. Later another road was built from Plapalli to Muzhiyaar via Aangaamuzhi. This is the present Sabarigiri road.

Even though there was the Chalakayam Road KSRTC started service through this path only in 1965. The road from Chalakayam to Pampa was built only 7 years later.

With new routes in the chart the journey to Sabarimala may get more easier with the glory of the traditional paths dwindling at a rapid pace.

1) The Erumeli route – the most arduous – the pilgrims cover about 61 km on foot through forest and hill track.

2) The Vandiperiyar route – starts at 94.4 km stone on the Kottayam – Kumily road.

3) The Chalakayam route. – the easiest of all. Chalakayam is near Pampa river. Sannidhanam is just 8 km from here.

The Erumeli route, used by Ayyappan himself during his forest expedition to kill Mahishi is described here.

It is about 56 km from Kottayam. There are shrines for Lord Dharmasastha and Vavar Swamy (the Muslim lieutenant of Lord Ayyappa).
The first timers to Sabarimala, called Kanniswamy, perform pettatullal. Pettatullal is painting the face with colours and dancing with wooden weapons to make one look odd.
The essence of this practice is to give up ones’ ego and surrender to Lord Ayyappa. They go round the Ayyappan Temple and Vavar Shrine and later bathe in the river.
Then the temple is visited again to seek authorization from Lord Ayyappa to tread the sacred hill Sabari. Later the pilgrims leave Erumeli under the guidance of their Guru for Sannidhanam.

It is a river about 4 km from Erumeli. Lord Ayyappa rested here during his expedition. It is from here the rise begins. Giving alms here is important. By giving alms, one is disposing of all dharma and seeking asylum in Ayyappa. The forest beyond Perur Thodu is poongavanam (Ayyappan’s garden).

About 10 km from Perur Thodu is Kalaketti. The legend says that Lord Shiva, Ayyappa’s father, came on his ox and tied it here and witnessed Lord Ayyappa killing Mahishi. There is a shrine where the pilgrims light camphor and break coconuts.

Azhutha river, a tributary of Pampa, is about 2 kms from Kalaketti. On the far side of the river is the steep Azhutha hill, famous for its arduous track. In the 2 km of steep ascent there is hardly anyone who does not shed tears. At the summit of Azhutha is Kallidumkunnu. The pilgrims drop the pebble taken by them from Azhutha river here. This is done as the mortal remains of Mahishi was cast off from here and filled with stones.

`The next important place is the Inchipparakota where there is Kotayil Sastha shrine. Pilgrims offer prayers here and break coconuts. From here the pilgrims descend the slippery path carefully. The descent ends at Karimala thodu (canal) with Azhutha hill on one side and Karimala hill on the other. Pilgrims rest here for a while.

Karimala is the abode of elephants which visits the Karimala canal to drink water. Pilgrims light the aazhi (campfire) to protect themselves from wild animals and cold weather. Karimala hill consists of seven levels and is climbed in stages. As the ascent of 5 km is difficult the pilgrims continuously chant saranams. On top
of Karimala the terrain is flat suitable for the pilgrims to rest. It is interesting to see the Nazhikkinar – a well within a well with fresh spring like water. Prayers are then offered to Karimalanthan, Kochukaduthaswami and Bhagawathi, all deities. From here after the exhausting descent one reaches the Pampa river that is about 5 kms.

Pampa is the most important and holy spot on the way to Sannidhanam. It is here that Lord Ayyappa was found by King Rajasekara. The Pampa river is as holy as the Ganges. The Pampa water purifies one from curse and evil.

Pampa KSRTC station is the nearest depot to Sabarimala that can be accessed by road. Sabarimala is about 5 Kms away from Pamba. Kerala State Road Transport Corporation operates buses to Pampa from all major bus stations in the State.

KSRTC has started operating buses to Coimbatore, Palani and Thenkasi from Pampa for the convenience of the Sabarimala pilgrims. Besides, the Government of Tamil Nadu, Karnataka, Andhra Pradesh and Telangana has been given the permission to operate buses to Pampa. A KSRTC chain service exists between Pampa and Nilackal base camp.

The Travancore Devaswom Board (TDB) has conducting daily bus service from Thiruvananthapuram to Pampa as part of the Sabarimala Mandalapooja- Makaravilakku festival. The bus will start from Pazhavangady at 9.00 and return at 12.00 noon the next day from Pampa. Additional information on the service can be had directly from the booking centre at the Board office at Nanthancode or over phone (0471-2311810).

Temples To Visit in Thrissur, Kerala

Temples To Visit in Thrissur, Kerala