Nawab Zaffar Jung Bahadur had a passion for stars and showed “scientific temper”, after that it became a part of science jargon. He was also a Minister; in 1901 he imported two telescopes – 15-inch grub refractor and an 8-inch Cooke astrograph from England. Those were mounted at a strategic location in his estate at phisalbanda on the outskirts of the old city. In 1908 the nawab shifted to Begumpet and this spot was known as Nizamiah observatory. This observation was one of the oldest and second observatories in the country, which plays a major role and became prominent for the participation in the international projects.

This is serving the purposes of the astrograph sky survey of mapping and preparing the extensive Astrograph Star Catalogue in the celestial zone. The task of mapping during a zone covering decline 17 to 23 degrees south was originally assigned to Santiago Observatory in Chile, after that again shifted to Nizamiah.

The project reaches within the publication of 12 volumes of catalogues giving correct positions of nearly 8, 00,000 stars”. He recorded his observation on star activity in the international geo-physical year 1964-65 and became a The observatory, that additionally participated in recording star activity within the International geology Year in 1957-58 and also the International Quiet Sun Year in 1964-65, became a pioneer to the Japal – Rangapur Observatory installed the 48-inchs reflecting telescope. The OU Astronomy Department itself improved as the Centre of Advanced Study in Astronomy. The observations of variable stars communicated to British people Astronomical Association and also the Harvard College Observatory. 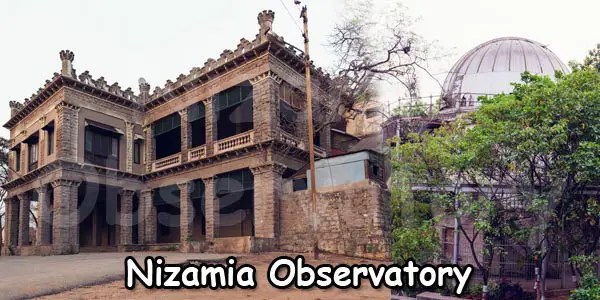 Observatory Nizamia by Mr. Burhan Hussain. By the end of the nineteenth century, British India had only two observatories; One Ooty and the other Nanital. In 1908, Nawab Zafar Jung studied Astronomy in England and returned to Hyderabad with 2 telescopes and one expert. Nawab Zafar Jung promised the expert a net salary of 1,500.00 Osmania Sikkah Rupiah per month.

He offered telescopes to Nizam, the Nizam ordered to install the telescopes at Begumpet, where they stayed for the nearly 50 years. Later Mr. Chatwood, B.Sc. FRAS was appointed as Director in 1908, he was replaced by M.R.J.Petcock, B.A.FRAS 1924.M.R.J.Petcock was replaced by the famous astronomer T. P. Rao Saheb Bhaskaran, M. A. FRAS, F.N.I. in 1929.

Mr. Chatwood and Mr. Pocock has published two volumes of the results published in 1918. All the remaining volumes of the “Carte due Ciet’ Hyderabad Section was completed under the guidance of Mr.T.P. Huascaran, the volumes has published rest catalog astrographic, Which led the work to a successful conclusion.

In 1923 the equatorial telescope seismograph Rubb and Milne-Shaw was erected for the investigation of earthquakes and a second machine in 1929. A special underground chamber was built to these sensitive instruments In 1928, at the request of the International Astronomical Union, 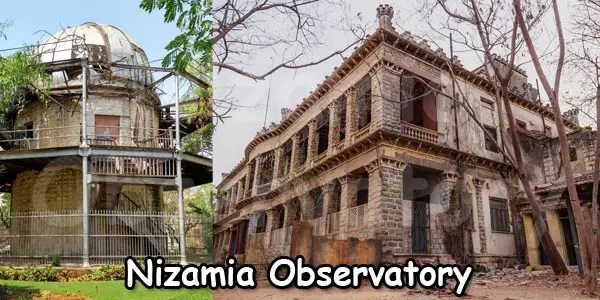 the section of the sky originally allotted to the observatory at Potsdam(Germany) was undertaken by the Nizamia Observatory. The work of measurement and reduction was completed and three volumes were published by the International Astronomical Union A blank comparator for rapid comparison of astronomical photos was added to the equipment in 1938. The proper notion of about 200 stars exceeding a sixth of a second per year was determined on the suggestion of Government of British India In 1929 a balloon pilot station air conditions was observed, attached to the observatory. The flights were organized in co-operation with the weather service of the Government of British India. The observatory exhibited “astrographic catalog –
section of Hyderabad” in four volumes in collaboration with the International Astronomical Union.
Nizamia Observatory also kept records of earthquakes and rain in the state of Nizam.