About Pongal:
‘Pongal’, only Hindu festival follows solar calendar and celebrated on 14th January every year. Astronomical significance of ‘Pongal’ is beginning of ‘Uttarayana’ when sun moves northwards for six months. In Hinduism, ‘Uttarayana’ is considered auspicious, as opposed to ‘Dakshinaayana’ when sun moves southwards. All important events are scheduled during ‘Uttarayana’. ‘Makara Sankranthi’ is an event celebrated when Sun enters zodiac sign of ‘Makara’ or Capricorn. 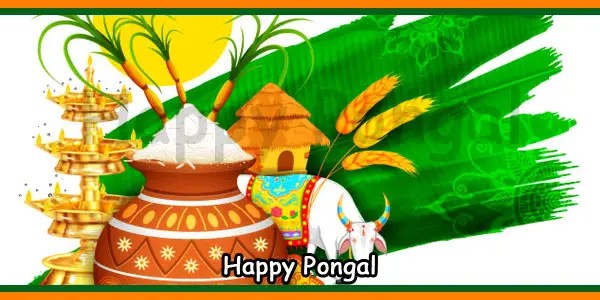 In Hindu temples bells, drums, clarinets and conch shells herald the joyous occasion of ‘Pongal’. As a symbol of bountiful harvest, rice is cooked in new pots until rice boils over. Temple rituals include preparation of rice, chanting of prayers. Gods are also offered vegetables, sugarcane, spices that are consumed by devotees for cleansing past sins.

‘Pongal’ means end of traditional farming season, so farmers take a break from monotonous routine. They perform puja to some crops as a sign of ending traditional farming season. Also, this gives time for a series of festivals celebrated in calendar year. There are four festivals celebrated in Tamil Nadu for four consecutive days in that week. ‘Bogi’ on 13th January, ‘Pongal’ on 14th January, ‘Maattup Pongal’ on 15th January, and ‘Thiruvalluvar Day’ on 16th January.

The festival is celebrated for four consecutive days. First day, ‘Bhogi’, old clothes and unnecessary items are burned in bonfire marking beginning of new life. Second day, ‘Pongal’, begins at dawn when fresh milk is allowed to boil over the vessel. The traditional of ‘boiling over’ is referred to the literal meaning of Tamil word ‘Pongal’. People prepare savouries and sweets, visit each other’s homes and exchange greetings. Third day, ‘Mattu Pongal’, is for offering thanks to cattle since they plough the lands. On the last day, ‘Kanum Pongal’, people go out to picnic.

Festival called ‘Jalli kathu’ is celebrated in Madurai, Tiruchirapalli and Tanjavur located in Tamil Nadu. Bundles of money are tied to horns of ‘Pongal’ ferocious bulls that brave villagers retrieve. Everyone shares the community meal made of freshly harvested grain. Day is also called ‘Tamilian Tirunal’ that is celebrated in fitting manner throughout Tamil Nadu.

Harvest festival of ‘Pongal’ symbolises the adoration of first fruit. This crop is harvested only after a certain time of year. Cutting the crop before the required time is strictly prohibited. Although, initially ‘Pongal’ was festival for only farming community, today it is celebrated by all. In south India, all three days of ‘Pongal’ are considered important. However, south Indians who have settled in north India generally celebrate only the second day. Also, festival is ‘Pongal Sankranti’ because it coincides with north Indian ‘Makara Sankranti’ and ‘Lohri’.