Lakshmana Perumal Temple is a Hindu Temple dedicated to Lord Vishnu located at Thirumoozhikkulam Village, close to Cochin City in Ernakulam District of Kerala. Presiding Deity is called as Lakshmana Perumal / Thirumoozhikkalathaan / Sukthinathapperumal and Mother is called as Madhuraveni Nachiyar. Constructed in the Kerala style of architecture, the temple is glorified in the Divya Prabandha, by Nammalwar and Thirumangai Alwar. It is one of the 108 Divyadesam praised in Nalayira Divya Prabhandams.

The temple is situated on the banks of the famous Bharata Puzha River in Kerala. No music is played during worship services here, unlike other temples. Thirumoozhikkulam is one of the 32 Brahmin Gramams in Kerala. There is also a shrine for Lord Shiva showing the harmony between Saivite and Vaishanavite faiths. The temple is under the administration of the Travancore Devaswom Board. 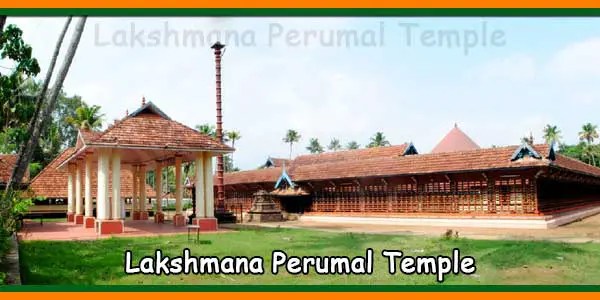 Lakshmana Perumal Temple at Thirumoozhikkulam is one of the four temples that devotees visit in the month of Karkidakam as part of the sacred Nalambalam Thozhal pilgrimage. Since Lakshmana is the third of the four sons of Dasaratha, this is the third temple to visit. While the other three temples – Triprayar Sree Rama Swami Temple, Irinjalakuda Koodalmanikyam Bharata Temple and Payammal Shatrughna Temple are in the Thrissur district, Lakshmana’s temple is in the Ernakulam district.

It is believed that the temple was built according to the design made by Perumthachan, the legendary master artisan. The temple was set on fire in 1790 during the invasion by Tipu Sultan and the idol was desecrated. It was renovated later during the reigns of Travancore Kings Sree Moolam Thirunal Maharaja and Sree Chithirai Thirunal Maharaja. Vattezhuthu inscriptions can be found on the northern side and below the pranalam and also on the western side of the Vallyambalam, confirming the age of the temple.