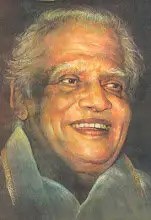 Dr. Acharya Aatreya was born as Kilambi Venkata Narasimhacharyulu on 7 May 1921 in the Mangalampadu village of Sullurpeta Mandalam in the Nellore district of Andhra Pradesh. His pen name is based on their family Gothra.

Dr. Acharya Aatreya made enormous contributions to the Telugu drama (‘Rangastalam’) and has pioneered many techniques, which were later followed by many. He revolutionized the Telugu drama with his thought provoking play ‘N.G.O’ (Non-gazetted officer). He continued his pursuit for social reform, transformation and universal peace, with his 10 Natakams (plays) and 15 Natikas, which include Bhayam (Fear, till date, this is fantastic psycho analysis of human being), Viswa Shanti (Universal Peace, an aftermath to 2nd World War, atomic bombs), Kappalu (Frogs), Goutama Buddha, Ashoka Samrat, Parivartanam, Edureeta and Tirupathi. Some of his works are missing and not found till date.

He entered the realm of films as a lyricist for the movie Deeksha in 1950. His debut song Poraa Baabu Po is tuned by Pendyala Nageswara Rao and sung by M. S. Rama Rao. Samsaram, in 1950, was Athreya’s first film script. Athreya also produced and directed the film Vagdanam in 1961. As his songs are full of simple and clear words, they became some of the most memorable Telugu film songs. He died on 13 September 1989 in Madras.

He was awarded an Honorary Doctorate Degree by Dr. B.R. Ambedkar Open University of Hyderabad, for his contributions to Telugu Literature.

Attributes
Known for his poetry on the human soul and heart, he was given the title ‘Manasu Kavi'(Poet of Heart). His poetry is philosophical and intellectually satisfying. Such can be seen in Aathreya’s lyrics has they made people weep due to the deep meaning in his lyrics. He was thus sought after as a lyricist. However, he was known for the delay in penning lyrics and thus, throwing filming schedules haywire and causing heart burn to producers so to speak. A critic remarked the former in Telugu “Aathreya vrasi janaalani yedipisthaadu, vraayaka nirmaathalani yedipisthaadu” which meant “By writing, he makes people weep; by not writing, he makes producers weep…”.[citation needed] Aathreya’s song Theta theta Telugula tellavari velugula Terula Selayerula from the movie Prem Nagar is very popular in Andhra Pradesh.

Heart is dumb, but it does have a language, is there a heart with ears listening to it?
Aahreya rayakunda nirmatalani raasi prekshakulanu yedipistadu
*Athreya makes the producers cry by not writing a song and makes the audience the same by writing the song.