Ganesh Chaturthi is a popular festival of India celebrated throughout the country. Besides its religious importance, the festival has great economic significance too, especially in the cities of Mumbai, Pune Bangalore, Hyderabad, and Chennai. Many industries, commercial establishments, artists and artisans depend on this festival and earn a substantial amount of income. As per Hindu traditions, this ten-day festival is celebrated in the month of Bhadra starting from the fourth day (Shukla Chaturthi) to fourteenth day (Anant Chaturdashi) of the waxing moon period. It is celebrated with high spirit and enthusiasm throughout the country, particularly, in the states of Maharashtra, Goa, Orissa, Karnataka, Andhra Pradesh, and Kerala.

The big-budget celebration of the Ganesh Chaturthi Festival in public comprises of the following:

Wide Scale Organization: Celebration of Ganesh Chaturthi in public is managed by the people of the locality. The preparation of this festival needs sufficient time and hence it begins few months before the commencement of the festival. Organizers of the area collect huge amount of money to meet the heavy expenditures involved in the celebration of the festival. Skillful artisans work continuously to create huge idols of Ganesh to be positioned at the various mandaps or temporary pandals in public places.

Pandals (Canopies) and Idols: Excellent artwork and illumination of the pandals (canopied tents) are the major attractions of the Ganesh Chaturthi celebration in public. The mandaps and idols may be of different kinds in different states. The mandaps will be wonderfully decorated with lights, flowers, banana trees, and other specific decorations displaying the current events or religious themes. In Karnataka they use coconuts and organic products to make the idols and in Goa and many other states, clay idols are popular. 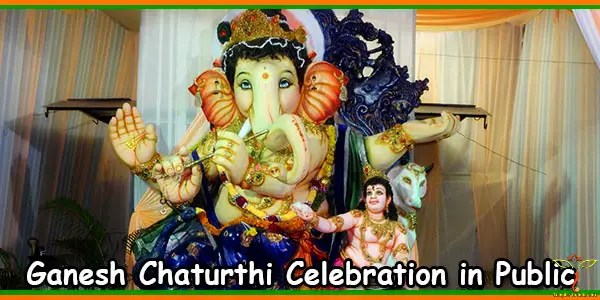 Rituals: Priests, neatly dressed in red silk dhotis and shawl, observe strict rituals for worshipping the Lord. The idols are installed in the pandals and adorned with sandal paste and flowers. An earthen pot, called kalsh, containing rice or holy water is kept near the feet of the idol. Pranapratishtha ritual is performed first for infusing life into the idol. Next is Shhodashopachara which involves prayers in sixteen ways. Various naivedyas including coconut, 21 durva blades of grass, red flowers, 21 modakas, jaggery, etc., are offered to the lord. It is followed by chanting of Vedic hymns from the Rig Veda, Ganesha stotra from the Narada Purana and the Ganapati Atharva Shirsha Upanishad, and finally arti of the deity is performed.

Festivities: Ganesh Chaturthi in public is celebrated in a grand manner with various cultural programs, orchestra, dance and theatrical performances. In addition to the festival merriments, community services are arranged such as free medical check-up camps, blood donation camps, etc., to help the poor and needy.

Festival Food: There will be sufficient number of temporary food stalls, serving the delicacies of this festival. The most popular festival food is Modak, which is known by different names. It is known as ukadiche in Maharashtra, Kuchchida modaka or kadubu in Kannada and kozhukattai in Karnataka. Modak is made of rice flour stuffed with jaggery, dry coconut, and dry fruits. Another variety of chocolate, banana modaks are also available. The worship of Lord Ganesh comes to an end by offering twenty one modaks.

The festival concludes after ten days with the immersion (Visarjan) of the idol in water. Grand processions with fascinating cultural programs and tableaus are seen on the streets, accompanied by thousands of people.

Thus Ganesh Chaturthi celebration in public is a very significant one, particularly in the state of Maharashtra. During the celebration, a devotional atmosphere filled with the sound of slokas, hymns, mantras, drumbeats and the chanting of ‘Ganapati Bappa Morya’ resonates in the streets of Mumbai.