Various names and unique ways of celebration of Pongal festival are as follows:
Harvest festival is celebrated internationally with their own distinct names and rituals.
All through history of mankind, bountiful harvest has been celebrated with ceremonies of thanksgiving. Before formal religion was established, many thought crops had spirits causing them to grow and to die. Hence, a good abundant harvest season always brings joy, happiness and contentment.

Communities of the world namely Japanese, Indians, Romans, Chinese and Korean have special day. They all give thanks for bountiful harvest. The names, rituals and traditions of these festivals differ in form and presentation. However, their spirit is same. A day is set aside to reflect on nature’s blessings.
Internal names of harvest festival that depict the spectra of celebration as practiced by these different cultures are as follow:

Korea – Chu’sok:
In Korea, ‘Ch’usok’, harvest festival is held in September or October. This festival day is marked by rising full moon known as “Harvest Moon.” ‘Ch’usok’ is generally described as kind of Thanksgiving for good harvest. As a matter of fact, really this is also a holiday dedicated to ancestors. Families gather from all over the country also from overseas for this great holiday. 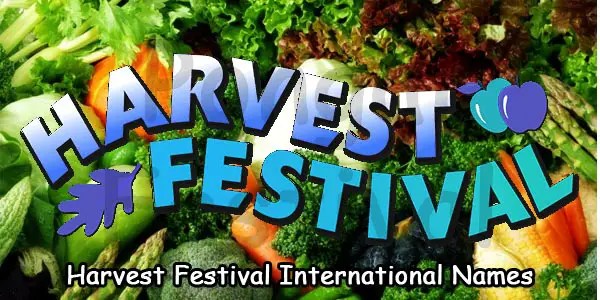 Japan – ‘Tori no Ichi’:
In Japan, ‘Tori-no-ichi’ or ‘Otori-sama’, harvest festival is held in November. Festival is lively with handclasps, shouts for deals. Celebration begins at midnight with the sound of Japanese drums that continue for 24 hours. Festival becomes livelier with the passing of the night. You may not be interested in rakes; however, you will enjoy liveliness of ‘Tori-no-ishi’/’Otori-sama’.

Sri Lanka -’Pongal’ or ‘Ulavar Thirunaal’:
In Sri Lanka, rituals of ‘Pongal’ are celebrated almost similar to Indian Tamils. Here too, festival refers to boiling rice in a pot for consumption. Sun provides life to rice. Utensil for transforming is the pot used for boiling over rice. Oxen assist farmers to prepare rice fields. They also help to thresh grains. Thus farmers glorify oxen to thank them during ‘Pongal’ festival.

China – Mid-Autumn Festival:
In China, August Moon Festival or Mid-Autumn Festival, harvest festival, is the most celebrated holiday. Festival is on the 15th day of the 8th lunar month. Chinese families celebrate end of harvest season with big feast. Unlike American Thanksgiving dinner and pies, Chinese share mooncakes made with newly harvested rice. These mooncakes are shared with all friends and relatives to mark way of giving thanks.

Vietnam – ‘Tet Trung Thu’:
In Vietnam, ‘Tet Trung Thu’, harvest festival, is a wonderful ancient festival revolving around children. This festival dates back to 15-20,000 years ago in Southeast Asia. It is traditionally held on 15th day of the 8th lunar month. This festival is important to families in Vietnam for many years. After harvest, festival was celebrated by parents to make up for lost time with children.

Israel – ‘Sukkot’:
In Israel, ‘Succoth or Sukkot’, week-long holiday commencing on 15th day of Tishri, Hebrew month. This is usually held in September and October according to Gregorian calendar. ‘Succoth’ occurs at harvest time so there are elements of harvest festival. Hence, this is ‘Jewish Thanksgiving’ and it is known as the ‘Festival of the Harvest’. Other names of this festival include ‘Sukkot’, ‘festival of Booths’, ‘Jewish Harvest Festival’ and ‘Feast of Tabernacle’.

African American – ‘Kwanzaa’:
‘Kwanzaa’, means ‘first fruits of the harvest’ in African language Kiswahili. ‘Kwanzaa’ is name of popular harvest festival. This has gained tremendous acceptance among African American people. It was founded by Dr. Maulana Karenga in 1966. ‘Kwanzaa’ is observed by more than18 million people worldwide. Festival is from 26th December to 1st January. Over these seven days, African descendents gather to celebrate with family, community. They enjoy cultural rituals and traditions that bond them. Also, they remember their heritage. They give thanks for good things they have and rejoice in goodness of life.

Africa – Yam Festival:
In Africa, the yam festival symbolises end of abundant food-producing harvest. Africans have always had festivals at this time of harvest. In Ghana, Yam Festival [‘Homowo’] lasts for three days. The festival begins with cleansing ceremony to honour family members who have died. Farmers give thanks to Gods who ensure a good harvest. Twins and triplets are honoured during this time as a special gift from God.