It may be recalled that Agastya Maharshi visited Kanchinagara to worship Devi Kamakshi and Vishnu made his ‘darshan’in the Swarupa of Hayagriva to delineate Lalitopakhyana. Now, Hayagriva confirmed that Lalita Devi whom Sarasvati-Lakshmi-and Gauri worshipped had reappeared as Kamakshi:

(Kamakshi is Adi Devata, smaller than an atom; Chit swarupini, Adi Kaarana or the Primary Cause and is called ‘Anta’or the Last. Her Second Swarupa has two hands, one with a Book and another with Yoga Mudra or of the Symbol of Yoga. Her third Form was pure while like snow, a jasmine flower, Chandra and a pearl; her fourth Form was that of thousand Rising Suns with a Chandra rekha on her head; she is Para Tripura with four hands carrying Paasha, Ankusha, Ikshu or Sugarcane and ‘Kodanda’ of Lalita as reappeared as Kamakshi as meditated by Sarasvati-Lakshmi and Gauri; she was Maha Deva’s two eyes, one as Shiva Kanchi and another as Vishnu Kanchi.)

Iti stutwaa Mahaa Devim Dhaata Lokapitaamahh,
Bhuyobhuyo Namaskrutya sahasaa sharanam gatah ॥
( Jaganmaata! Tripurasundari! Sister of Lakshmi Pati! Sarva Mangala Rupini! You are an Embodiment of Mercy, Shrigara Nayaki, Siddheswari, saluted by Top Yogis, Jagadamba, Unfailing donor of boons to Devotees; Praised by Himashaila; Always visioning Shankara with desire from your left Eye, apparently as she was Ardha Naareeswari. My salutations to you, as you bless the deeds of Srishti-Sthiti-Layas; you use weapons to smash those who are responsible for violating Varnaashrama vidhis. Devi Kamakshi! You are Swatma Rupini or of Form that is self- generated and neither Agamas, Vedas, Shastras, Tatwa Vettaas, nor Maha Munis. My greetings to you Devi, whom Brahma-Vishnu-Rudra-Ishwara-Sadashivas meditate and Indra and Devas prostrate. Vedas are your ‘nishvaasaas’ or exhalings; Pancha Bhutas are your looks; the Charaachara Jagat is your smile; It is with your instruction that Adi Sesha holds the weight of Earth, Agni produces flames, Sun gives out heat and radiance; Vayu is at work to blow winds; all the Tatwas numbering twenty-five (as described in earlier pages of this Purana) are all of Devi Swarupa; Shiva-Shakti-Ishwara-Sadashiva are all ‘Unmesha Bhedas’ or eye strokes; You are Guru, Mantra, Devata and ‘Pancha Praanaas’, Sarvaatma, Antaratma, Paramaananda, and Shri Vidya! Sarva Darshana Shastras constitute your body parts as opined by Panditas. You are Aayaa -niyama Swarupini; Desa-Kaala-Padartha-Vastu Rupini; Hema mayaakaara or of Golden Form! Kalyana Guna or of Qualities of Propitiousness! You are indeed beyond the Universe! Thus Brahma commended Maha Devi with great devotion and saluted her and requested her to reside at Kanchi for good as the inhabitants of this Karma Bhumi tended to suffer from ignorance and deserved her kindness. He further suggested that Shiva too be present with her. She consented to reside at Kanchi, asked Vishnu too stay there and let Shiva occupy her right body part. Brahma too resided at Kancha along with Sdarasdwati. Lalita Deva made her original appearance as Bala and subsequently, Brahma and Vishnu celebrated the auspicious wedding of Tripura Sundari and Shiva in the presence of Devas, Maharshi’s, Yaksha, Gandharva, Siddha, Vidyaadhara, and others as also Samasta Shaktis. They all hailed Lalita Devi as Kamakshi, the mere three worded Devi like Lalita, who was a Symbol of boon-provision. Hayagriva informed Agastya Muni: Tripura and other Shaktis were of her own creation. She improvised three Eggs and created Tri Murtis entrusting the three duties of Srishti-Sthiti-Samhara to Brahma-Vishnu- Shiva respectively from Satyaloka-Vaikuntha -Kailasha; Vishnu felt that he was the Supreme and as Brahma sat atop the Lotus stem sprouted from the navel of Vishnu resting on Ksheema Samudra, Brahma claimed superiority and the ensuing fight ended up as a third entity emerged as a huge Shiva Linga without a beginning and end. As Maheswara made his appearance, Brahma still claimed his seniority and out of anger of Maha Deva emerged Bhairava who tried to snip Brahma’s fifth head but Brahma’s kapala was not leaving LordShiva; he had to undergo the ‘ Brahma hatya’ sin and during his Tirtha Yatras landed at Kanchipuram. As he was on ‘Bhikshaatana’or door-to-door begging with Brahma Kapala as hi begging bowl, he witnessed a Devi on way and she gave him a Jyotirmaya Bhiksha (alms) when Shiva got rid of the Brahma Kapala which fell on the ground. The Devi whom Shiva thanked profusely was none else than Kamakshi. Another incident which was highlighted by Vasishtha Maharshi to Suta Muni and the huge group of Sages about the significance of Kanchi was about King Dasaratha of Ikshwaku Kula. For a number of years, the King could not secure children; he had considerable faith in Maha Tripura Sundari and was engaged in her worship for a very long number of years. One night Tripura Sundari appeared in Dasaratha’s dream and stated that due to several of his sins committed earlier he was unable to secure children so far and now it was time as he and his wives should be blessed with excellent progeny; Tripura Sundari in the Form of Kamakshi further directed Dasaratha to visit Kanchi along with his Prime Consort Kaushalya to bathe in Kampa Nadi and worshipped Kamakshi and prostrated before the Shri Chakra Swarupini and spent there seven days continuously and on the eighth day, they heard aa Celestial Voice that Vishnu himself would be born with his ‘Amshas’ as model sons of their ‘Vamsha’!

Special and Interesting Temples in India

Kanchi -The Kamakoti Puri
The Story of Vishvaksena in Telugu Special and Interesting Temples in India 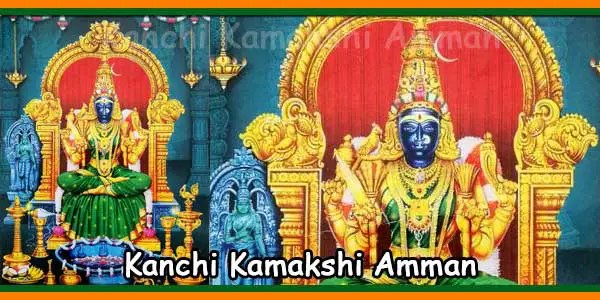 The Glory of Kanchi Kamakshi Ambal