Most temples are known as the Lord or his wife. For example, Madurai reminds us of Goddess Meenakshi, Chidambaram for Lord Natarajar, Kancheepuram for Goddess Kamakshi Amman, etc. However, there are well-known temples of the Lord and his spouse, including Thirukkadaiyur. The Abirami Samedha Amirthakadeshwarar temple of Thirukadaiyur is associated with the legends of Markandeyar and Abirami Battar.

It is a large temple with 5 Prakarams, imposing towers and ornate Mandapams covering an area of 11 acres. Based on the inscriptions seen here, it is deduced that the stone base of the central sanctuary existed even during the Raja Raja Cholan period (early 11th century). It was during the period of Kulottunga Chola I (1075 – 1120) that the brick walls of the temple were replaced by stone walls and that the Mandapam was built in front. The Rajagopuram is full of mortar images that represent the legends associated with the temple.

It was predicted that Markandeya, son of the sage Mrikandu Magarishi, would live alone for 16 years. According to his father’s advise, Markandeya worshipped Lord Amirthakadeshwarar in Thirukadaiyur by carrying water from the Ganges through an underpass leading to the temple. This passage still exists but it is closed. That day, Yama (Yaksha) appeared with his rope, Kaala Paasa. Markandeya sought refuge in the Lord and embraced Shiva Lingam. The Lord warned Yama not to touch Markandeya since he was under his protection. Yama did not listen and released the bond between Markandeya and Lingam. Enraged by this act of imprudence, the Lord kicked him with his left leg and held him under his left foot, rendering him inactive.

Images in the temple depict the Lord with a raised forefinger, warning Yama. The mark of the Kaala Paasa is visible on the Lingam. With Yama being rendered inactive, there were no deaths on earth. As nature should have its way, Kalasamharamoorthi (Kala + Samharam + Moorthi), the other name by which Lord Amirthakadeshwarar is known – Lord Shiva brought Death to life. It is here that the significance of ‘kicking with the left leg’ is spoken about. Had He desired to quell Yama forever, he would have held him under his right leg – as in the case of Muyalaka. The very fact that he used his left leg points to the fact that he intended it as a punishment for an act of rashness and not otherwise.

Abirami Battar lived during the rule of King Serfoji (Sarabhoji). He was completely devoted to the consort of Lord Amirthakadeshwarar and Lordess Abirami. He would sit in meditation and in the blissful state of trance for hours – sometimes days – together in the presence of the Mother.

King Serfoji, who had visited the temple, saw this temple priest, who was lost in himself and did not even stand up as an elementary mark of respect to the King. Abirami Battar was at that moment meditating and was immersed in the vision of the luminous visage of the Divine Mother Abirami. The king was annoyed with Battar for not showing the respects due to him and enquired about him with the persons standing close by. Unfortunately, Abirami Battar did not get positive feedback.

The King then approached Abirami Battar and asked him for the Thithi (lunar day) of that day. It was new moon day. Since the mind of Abirami Battar was filled with the luminescent vision of Abirami, he – even without opening his eyes – said that it was full moon day.

The King was angered by this answer and he thought that he had a clue to the ‘true bearings’ of this fraud. ‘If there is no full moon rising this evening,’ he warned Battar, ‘you will be put to death.’ Abirami Battar was told what had happened only after he opened his eyes after a long time, from his meditation. Poetry, evocative, moving and having the power to melt the hearts of all, flowed from him right from that moment. He sang a hundred verses in praise of Abirami. The verses are known as Abirami Andhadhi, a unique kind of poetry that begins with the last foot – or a portion of it – of the previous verse. And the last foot of the last verse would end with the first foot of the first line of first verse. Abirami took her ear ring and threw it in the sky. That shone in the sky brighter than the full moon.

The worship services are offered six times a day in the temple. Almost every day dawns with one celebration or other, as hundreds of pilgrims throng the temple to celebrate their 60th, 70th, 80th birthdays and other Ayul Shanthi Parihara Homams.

Saastras says the following homams to increase our life time.

The above said shanthi homams to pray the GOD MAHA MRITHUNJEYAR using SRI MARKANDEYA SLOKAS (said by Sri Markandeyar at Thiru Manalmedu temple) for the longevity of human life without any disease for a healthy and prosperous life. 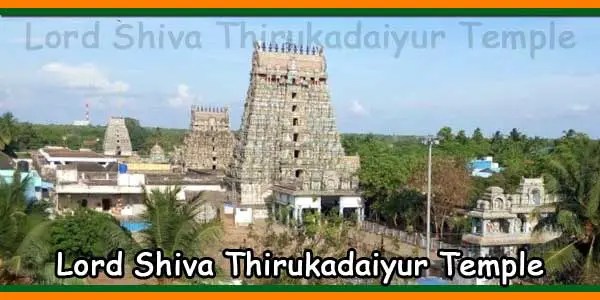 How to reach Shastiapthapoorthi Thirukadaiyur Temple:

By Air:
Thirukadaiyur Temple is 145 km from Tiruchirappalli International Airport.

By Train:
Mayiladuthurai Station is 44 km and Nagore is 55 km.

By Road:
Temple is 15 km from Karaikal, which can be reached by bus.