‘Pongal’ is a harvest festival that is equivalent to Thanksgiving for Tamil. In an agricultural based civilisation harvest plays an important role. Farmers cultivating their lands depend on cattle for ploughing the soil. Also, correct precipitation in the form of rainfall and the Sun. Hence, farmer expresses his gratitude to these essential items, once a year during harvest festival. After wet month of ‘Margazhi’ [mid-December to mid-January] is over, new Tamil month of ‘Thai’ arrives. There is a series of festivals celebrated in the new month of Thai. Very first day of ‘Thai’ month is festival of ‘Pongal’ Day. The literal meaning of the word ‘Pongal’ is boiling over. This can be boiling over of milk or boiling over of rice.

The four days celebration of ‘Pongal’ marks a period of plenty, peace and happiness. ‘Thai Peranthal Vali Perakum’, Tamil saying can be translated. At dawn of ‘Thai’ there would be peace, happiness, prosperity, brightness and harmony in everyone’s life. This festival of ‘Pongal’ is celebrated in hour of Sun for a bountiful harvest. Families gather to rejoice and share their joy and their harvests with others. The Sun is offered a ‘Pongal’ of rice and milk.

Preparations for this festival start early. Very first thing, always present in Hindu homes, even before beginning of ‘Pongal’ is ‘Kolams’. These are decorative designs made with rice flour are drawn on floor outside the door. ‘Kolams’ are symbols of welcoming guests to entrances of the houses. At the centre of ‘Kolams’, lumps of cow-dung are used to set five petal pumpkin flowers. These pumpkin flowers are symbols of fertility and offering of love to presiding deity.

The houses are cleaned and well decorated for ‘Pongal’ festival. In order to celebrate this occasion, Hindus buy new clothes. Women of the household prepare sweetmeats. General belief is that harvest festival brings great wealth, prosperity and goodness to their homes. Each of four ‘Pongal’ days, has different importance. Each day is dedicated to worshipping a separate deity. 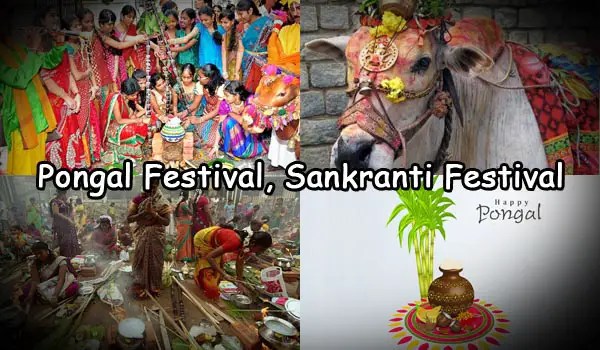 The first day is known as ‘Bhogi Pongal’ when people spend on domestic activities. They also spend together with their family members. Day is celebrated to honour Lord Indra, the supreme ruler of clouds that give rains. Second day, known as ‘Pongal’, is the most important day of the entire festival. Prayers are offered to Sun God honouring sun on this day is called’ Surya Pongal’.

The third day known as ‘Mattu Pongal’ is day of ‘Pongal’ for cows. Cattle are washed; their horns are painted and covered with shining metal caps. ‘Kanu Pongal’ that is also on the same day as ‘Maatu Pongal’ is celebrated by sisters for the welfare of their brothers. Hence, this festival is as important as ‘Raksha Bandhan’ or ‘Bhai Dooj’ of North India.