Mid-January is an important time in the Tamil calendar. This is because ‘Pongal’, the harvest festival, falls typically on 14th or 15th of January. This is an ideal, typical ‘Tamil Festival’. ‘Pongal’ is a harvest festival and traditional occasion for giving thanks to nature. It is for celebrating life cycles so that there are abundant crops of grain. Tamil call this festival ‘‘Thai pirandhaal vazhi pirakkum’. Tamil believe that complex family problems would resolve at the dawn of ‘Thai’ when ‘Pongal’ begins. ‘Thai’ is also traditional month of weddings. It is not surprising because community depends mainly on agricultural. The wealth gained from a good harvest provides expense for the family wedding. 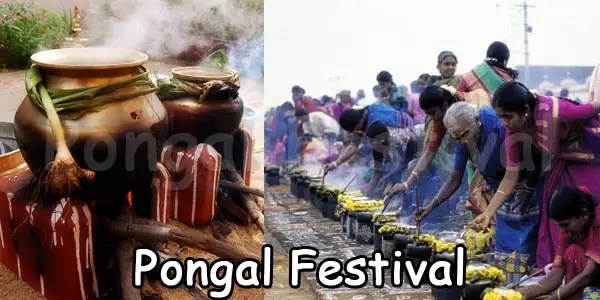 The Second Day Festival:
On second day of ‘Pongal’, the ‘puja’ that is an act of ceremonial worship is performed. The rice is boiled in milk outdoors in an earthenware pot. It is then offered symbolically to the Sun God along with other oblations. Everyone wears traditional clothes and markings. Also, husband and wife dispose ritual utensils used for ‘puja’. In villages, ‘Pongal’ ceremony celebrated is simpler than in cities. However, devotion is same everywhere. As for main ritual, a turmeric plant is tied around the pot used for boiling rice. Offerings include two sticks of sugarcanes in the background, coconut and bananas in a dish. In addition to these offerings, there is presence of most common and importance of ‘Kolams’ design. After bathing early morning, women make ‘Kolams’ with white lime powder on grounds of front courtyard.

The Third Day Festival:
The third day is known as ‘Mattu Pongal’ that is the day of ‘Pongal’ for cows. Multi-coloured beads, tinkling bells, corn sheaves and flower garlands are tied around neck of cattle. They are worshiped, fed with ‘Pongal’ and taken to village centres. Resounding of cattle’s bells attract villagers while young men race each other’s cattle. The whole atmosphere is full of fun and festivities. ‘Arati’ is performed on the cattle to ward off evil eye. According to a legend, once Shiva asked his bull, ‘Basava’, to descend to Earth. Shiva instructed to request mortals to oil massage and bathe every day and eat once a month. Accidently, ‘Basava’ told everyone to eat daily and take oil bath once a month. Basava’s mistake annoyed Shiva who cursed ‘Basava’, banished him to live on Earth forever. ‘Basava’ had to plough the fields and help farmers to produce more food. This legend is associated with cattle and they are honoured on third day.

The Fourth Day Festival:
The Fourth day is known as ‘Knau’ or ‘Kanum Pongal’ day. On this day, a washed turmeric leaf is placed on the ground. On this leaf are placed, leftovers of sweet ‘Pongal’, ‘Venn Pongal’, rice, red and yellow coloured rice. Also, betel leaves, betel nuts, two pieces of sugarcane, turmeric leaves and plantains. In Tamil Nadu, women perform this ritual before bathing in the morning. All women, young and old, of the house assemble in the courtyard. After placing rice in the centre of leaf, women pray for prosperity of their brother’s families and homes. ‘Arati’ is performed for brothers with turmeric water, limestone and rice, later sprinkled on ‘Kolams’.