Akaal Bodhan is another name for the worship of Goddess Durga in the month of Ashwin. Akaal Bodhan literally means ‘untimed worship’. Here the worship is carried out in an unusual time, which is different from the customary time for worship, namely Basant (Spring). As per Ramayana, during the battle between Rama and Ravana, Rama sought the blessings of Goddess Durga for his victory. He performed puja to the goddess during the uncustomary time of autumn and hence the puja was known as Akaal Bodhan.

To please Goddess Durga, it was necessary to worship her with 100 blue lotuses (Neel kamal). But Rama had got only 99 Neel kamals and he decided to offer one of his eyes as the 100th one. Goddess Durga was pleased with his deep devotion and she blessed him. Further, the battle commenced on Sapthami and Rama killed Ravana during the crossover period (Sandhikshan) between Ashtami and Navami; and Ravana was cremated on Dashami. Hence, we celebrate these four days of Durga Puja, which mark the victory of good over evil.

What are the rituals of Akal Bodhon?

Akaal Bodhon is the ritual to awaken Goddess Durga for worshipping her during the Durga Puja celebrations.

The 3-day celebration of Durga Puja in West Bengal is basically Navratri festival which is followed in other states, but only in a smaller way. 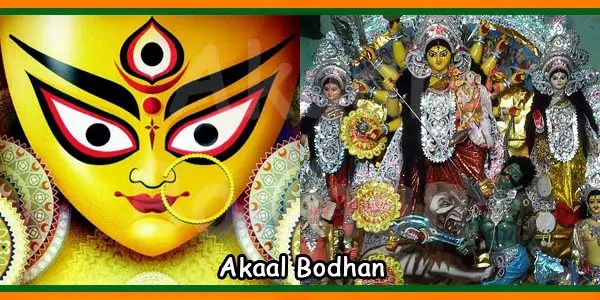