The sacred land of Kuzhalmannam, where this temple is located is connected to the Reign of Lord Sree Ram. Brahmin communities called Shaivates (people who worship lord Shiva) and Vaishnavas (people who worship Lord Vishnu) stayed here. Both these communities worshipped their respective deities according to their religious beliefs. It is sed that the Vaishnavas had left the place for some reason and later a Shiva temple was built here by the Shaivites. In the course of time, Shaivates also migrated from there. This temple was then managed by Azhvancheri thamprakkal and the administration was taken by the Zamorin rulers.

The temple has a history of over 2500 years. The deity of Lord Shiva in Azhagotha maha deva temple is monolithic, ie engraved from a single rock and is over 6 feet tall. The Sree Kovil is circular in shape. Vishnu temple was also constructed with equal importance. The presence of Devi, as Upadevatha in the Nalambalam of Mahadeva is also seen.

Azhakotha Mahadeva temple which is sed to be erected by Parushuram is an architectural masterpiece with a unique combination of the chaitanyam of Vishnu and Shiva. This temple was perilously under the control of Palakkad kings and ooranma under Paniyyormanakkal Namboothiri’s. Due to some conflict with the King, Namboothiris who lived around the temple premises migrated to Malappuram district with the assistance of Kozhikode rulers (Zamorin). Offended by the activity of the Namboothiri’s, Pallakad King brought Brahmin families from Thanjavoor in Tamil Nadu and built 51 Agraharams in around the temple premises for them to settle down. Later many temples were destroyed by Tipu Sultan including Azhakotha Mahadeva temple. These temples were reconstructed by Kozhikode Zamorin and the authority of the temple came under them. Here Bhagavathy is in the form of goddess Saraswathi. 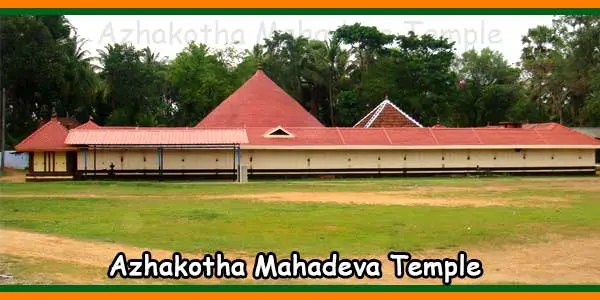 How to Reach Azhakotha Mahadeva Temple:

By Air:
Coimbatore International Airport is the Nearest Airport which is 80 km from the temple.

For Men: Dhoti or Mundu without shirts or banyan.
For Women: Saree with blouse/ Punjabi Dress with Dupatta / Chudidhar with Dupatta/ Half saree.