The temple is located in the district of Jagityal. In the South Bank of the sacred Godavari River, Dharmapuri also called “Dakshina Kashi” is Famous Nine Narasimha Kshetras of Telangana and Andhra Pradesh. 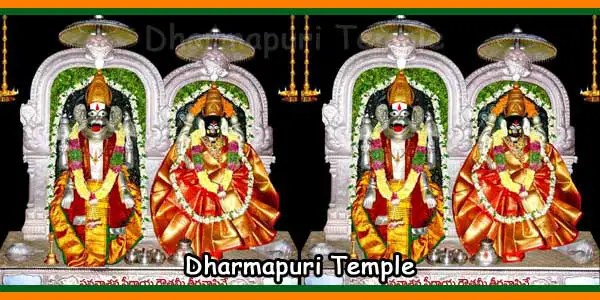 The city of the temple is sanctified by the Saikatha linga (Sand Ling) said that was installed by Sri Sri Rama during his trip to Dandakaranya. There is a mixture of Shaiva and Vaishnava culture, where people do not make fate between Lord Shiva and Sri Maha Vishnu. Having Lord Narasimha, the temples of Sri Ramalingeshwara and a mosque next to each other, is witness to the unity and integrity of the surviving Muslims and Hindus.

Keshtra’s importance is revealed in King’s life stories Dharmavarma, Princess Savitri and Dharmangada. References have been made this historic city into epics and many literary works that were mentioned as ‘Dharmapura’ in Skandha and Brahmanda Puranas, Dharmapuri during the Buddhist Dharmaram period in Dekkala Banda
inscription of Rashtrakutas. His name is also found in the writings of Ekamranatha from the Kakatiya period. Pothanamathya, Korvi Goparaju, Padmapurana by Madiki Singana, Kalapurnodayam by Pingali Surana, next to three Shathakas Narasimha, Narahari and Nrukesari composed by the well-known poet of Sheshachala Dasu Square about two centuries back, which are by all the best criteria in the history of Shathaka in the Telugu literature.

It flourished in the days of Jainism and Buddhism. Historical the evidence shows that it was under the control of Hindu kings, as Badami Chalukyas, Rashtrakutas and the relapsed velas testifying to the many ups and downs by nostalgia. To have such mythological and Historical significance, Dharmapuri hosts the sacred shrine of the Lord Narasimha Swami with Laxmi, Shiva, Venkateshwara, Gouthameshwara, Anjaneya, Sri Rama, Datthathreya and Sathyavathi in addition to Brahma Pushkarini are the main temples.

Dharmapuri is dotted with several temples connected by the RTC roots and draws a crowd of pilgrims, it is a center for the Vedas, Shastras, Puranas, Fine Arts and Poets, such as Cherikonda Dharmana, Krishnagiri Venkatagiri and Sheshappa, have flourished here. Elegance by hand the work of the sculptures is very evident in making idols here sculptures belonging to the Chalukya period are found in the Ramalingeshwara Swamy Temple inscriptions describing the stories of Mahabharata and Ramayana are located in the main temple.

The center was able to preserve its past glory despite the slipped by the Muslim dynasties under the Aurangazeb period. Now, all the temples are being renovated by the Department of Endowments and Devotees.

Details of Annual Festivals & Utsavams in the Temple: