The fourth day of the three-day ‘Pongal’ celebrations is called ‘Kaanum Pongal’. In some places this day is also known as ‘Karinaal’ or ‘Thiruvalluvar’ Day. This day is dedicated to sun god, Surya, who has its roots in ancient Brahminical tradition. ‘Pongal’ is rural, agricultural festival celebrating harvest so Sun is important part of proceedings. Sun is required for life on Earth. Also, without Sun crops would not sprout or grow so harvest would not be plentiful.

‘Surya’ Puja:
On ‘Kaanum Pongal’, an elaborate powdered chalk design of the Sun God, Surya is drawn. When the auspicious month of ‘Thai’ is underway, ‘Surya’ is worshiped. Sheaves of sugarcane are used in the prayer area. Freshly cooked food including typical sweet dish called ‘Sarkarai Pongal’ is first offered to Surya. Sugarcane is also offered for sweetness and happiness in life. Both sugarcane and coconut are considered auspicious symbols of plenty. Both are offered to Gods hoping for abundant harvest in the following year.

Customs and Rituals:
Ritual is similar to ‘Rakhsa Bandhan’ and ‘Bhai Dhuj’ when women pray for welfare of their brothers. Women perform this ritual before bathing in the morning. All women, young and old, of the household assemble in the courtyard. Women place rice at centre of leaf and request prosperity for brother’s home and family. Also, they perform ‘arati’ for brothers with turmeric water, limestone and rice. They sprinkle this water on the ‘Kolams’ in front of the house. 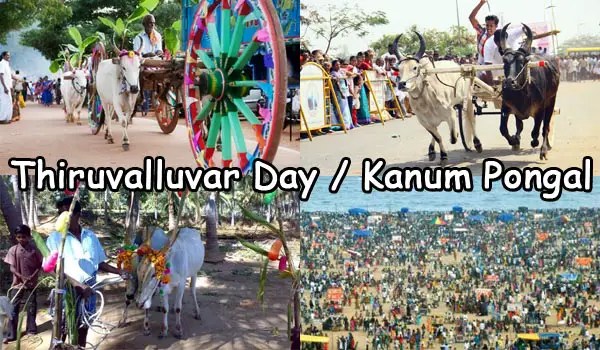 Celebration:
On this day, people travel to see their family members. Younger members of family pay homage to elders. Meanwhile elders thank them by giving money as token. Also, some visit temples, worship and thank God for all good things that are bestowed on them. Another thing many do is leave food out on banana leaves for birds to take. Many south Indians set aside first bit of cooked rice for crows to take. Hence this tradition is not necessarily a habit associated with only ‘Pongal’.